Barley Brigg are a mixed morris side based in Yoxford, near the beautiful Suffolk coast. Founded in 1989, we follow the North West tradition of morris which features sets of 8 or 12 dancers performing processional and geometrical figures, with the stepping accentuated by iron-shod clogs with bells. We are instantly recognisable in our patriotic colours of red white and blue, and our impressive flowery hats!

Blog page- some of our recent exploits

This is where we're going to be dancing this season, but keep checking for additions and updates. Regular Wednesday pub sessions will start late April and will be added here. 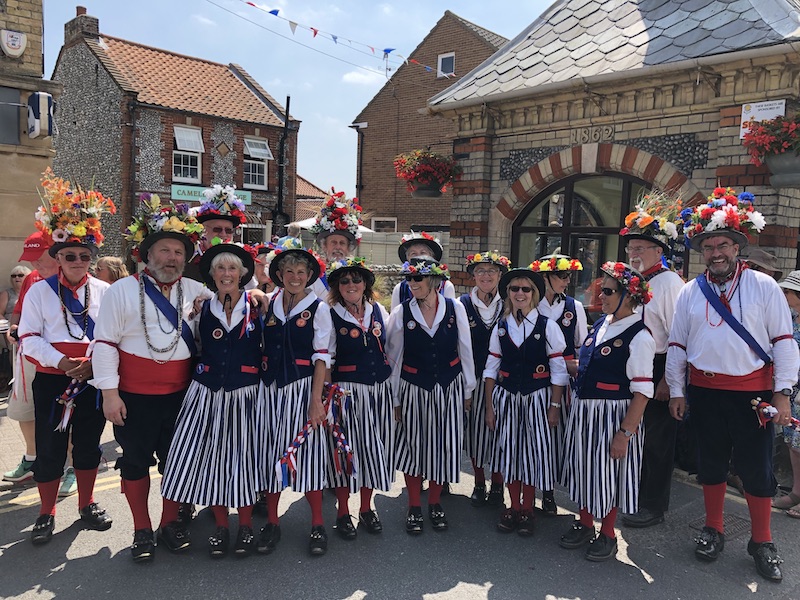 It's fun, it's easy, it will help keep you fit, and we are a friendly bunch...

...and you will be helping to keep a tradition alive.

We meet to practice weekly during Autumn and Winter, and in late Spring and early Summer you will find us out and about at various venues on and near the picturesque Suffolk coast.

You are very welcome to come along to a practice session at any time just to watch, or to have a go, either dancing or playing. No previous experience necessary! There will be tea and biscuits...

Join us at a practice to see what it's all about, at any time- drop us a line first just to check the session is going ahead. See the bottom of the page for contact details

Morris is the best known style of ceremonial dance in England and the earliest references to it date from the 15th century. Distinctive styles of dance were recorded in the 19th and 20th centuries: Cotswold originated in the South Midlands, North West in the mills of Lancashire and Cheshire, Border along the Welsh border and Molly in East Anglia.

North West dances are often processional in nature. A side consists of a dance leader and, usually, eight dancers. The leader calls the figures which are geometric patterns. A dance consists of a repeated chorus ('step-up') separated by five or six figures and a dance-off to end. Steps are march, polka (rant) or single step.

Barley Brigg dances in the North West style in elaborate and colourful costumes with the stepping accentuated by the use of clogs.

Originally based in Laxfield, Barley Brigg takes its name from Barley Bridge, to be found at Barley Green on the road to Stradbroke, which led to the Hoxne Union Workhouse. The 'residents' of the institution, which closed in 1871, would apparently hide their possessions near the bridge going in, and retrieve them later when they left.

In addition to our Summer evening pub dances, Barley Brigg appear at a number of events in East Anglia and further afield. In 2012 we visited the Netherlands and danced at the famous Cheese Market in Edam. In July 2008 we performed at the Rättviksdansen folklore festival in Sweden. We have danced on the West Coast of Ireland, the Isle of Wight, and Brittany and Bouchain in Northern France. We have performed at festivals such as Folk East, the Wimbourne Folk Festival, Rochester Sweeps, Potty Festival in Sheringham and many others.

We dance with a variety of hand-held implements which include cotton rope slings, decorated sticks, wavers, and vintage wooden bobbins from the woollen mills of Lancashire.

Music is an integral part of morris dancing and we have a fantastic band of musicians led by Ade on the melodeon.

The musical line-up is constantly changing but generally includes D/G melodeons, guitar, mandolin, bass drum and other percussion. Sometimes a fiddle, recorder, or brass instrument accompany the dances with traditional tunes such as Rattling Bog, Tralee Gaol, Salmon Tails and the Floral Dance. 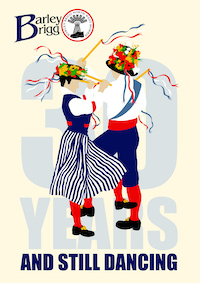 Practice sessions are in full swing preparing for our Summer 2022 season- if you would like us to dance at your event, or pub on our regular Wednesday evenings from late April to July, please get in touch- details below.

We need a reasonably large space with a hard surface (not shingle) to dance on, as we dance in clogs. Click on the link above for more information about morris, and Barley Brigg.

Note the new start time for practices, 7.30 to 9.30, with more time for drinks, nibbles and chat after!

Mardles- news from the Folk scene around East Anglia

Danegeld-North-West Morris, based near Woodbridge